A trip along the canal in a revamped boat used previously for collecting rubbish probably wouldn’t be near the top of the ‘must-do’ list for visitors but it’s a great free way to see the city. Yes there’s no charge and it’s good fun. We discovered it the first time we stayed at Baan Manusarn, an inexpensive family run B & B in a quiet part of Bangkok  down from Thewet Pier on the Chao Phraya river. There’s an interesting Thai market opposite the B & B(they are always worth a wander through) and a good cafe down the road  serving cold lager with entertainment from a very friendly cockatoo. 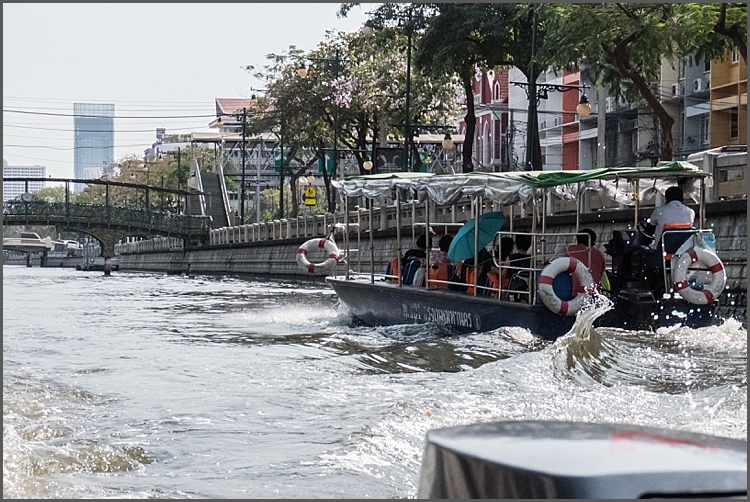 The Chao Phraya river flows through the middle of Bangkok, it’s a river that never seems to sleep. Apart from the ferries which are cheap, full of locals and a good way to get around, there are numerous tourists boats, river taxis and longtail boats criss-crossing the river, like a constant armada. It’s the huge commercial barges that I find the most fascinating. These boats seem to  go on for ever and when full float silently along this huge river dragged by a tug boat. Mostly I think they are carrying sand or rice and once unloaded they seem to bounce back up river behind their little towboats.

Early evening is when the tourist cruise boats start. You can’t miss them with their garish lights and loud music. I shouldn’t knock them as I know friends who enjoyed their two-hour trip and the ‘international cuisine’, but it’s not for us. We’d rather go down to the pier, chat with the locals, share an offering to the fish and watch the sun go down.

The nearest Buddhist temple (Wat Devaraj Kunchorn Warawihan) is quite near to our B & B and is a beautiful building, hidden down a narrow side street. On our second evening walking past we were drawn inside by the chanting of the monks. I love the sound but I’m always amazed at how the monks can sit that long without changing their position. Needless to say we eventually had to leave as we were both getting cramp! 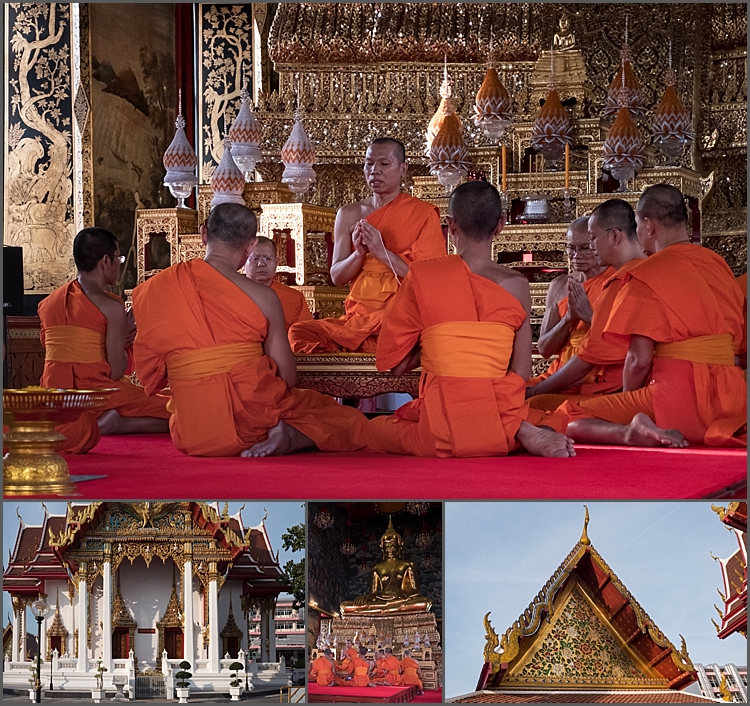 There are of course lots of places to visit in Bangkok. Most tourists go to The Grand Palace and Wat Arun   also called The temple of Dawn. A word of warning about visiting The Grand Palace – check out the dress code, the guards are very strict. If you show up improperly dressed there is a booth near the entrance where for a deposit you are issued with a wrap round long skirt. No problem like that at Wat Arun, our only problem was that we were suffering from jet lag and the heat as we’d only arrived a few hours earlier. We found it hard to drag ourselves around.

These people in the picture below at Wat Arun  have hired their costumes. You see groups like this dressed in national costume at all the main tourist places. Turns out they may not even be Thai! I have more pics like this which you’ll see in further Blogs. You’ll probably notice too that no-one takes the trouble to wear the ‘right’ shoes! 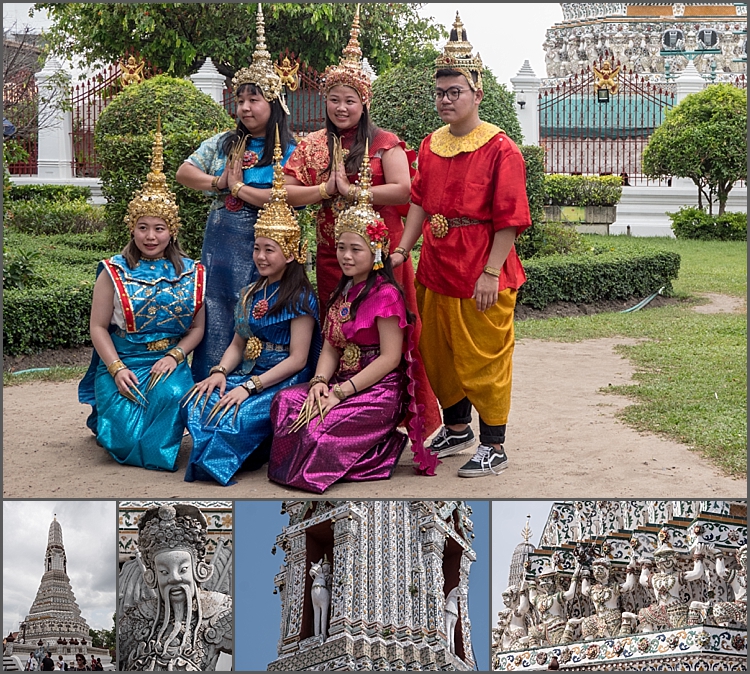 Whether The Grand Palace is always crowded with tourists I don’t know. Looking at the number of coaches parked outside I think it’s pretty impossible to go there without having to jostle with everyone. I gave up trying to get some clear shots of the amazing architecture and instead did the same as everyone else, sharpened my elbows and darted in front of anyone with a camera who was taller than me!

We quickly worked out that The Grand Palace is divided into two main areas; the Temple of the Emerald Buddha and the Royal residence. The place is still used for hosting royal ceremonies and welcoming the king’s guests and other foreign dignitaries.

The elegant statues of Buddha are beautiful but there are so many features here it’s no wonder everyone is clicking away in every direction. It was a bit of a bun-fight and after a couple of days in Bangkok we were looking forward to escaping to the country. 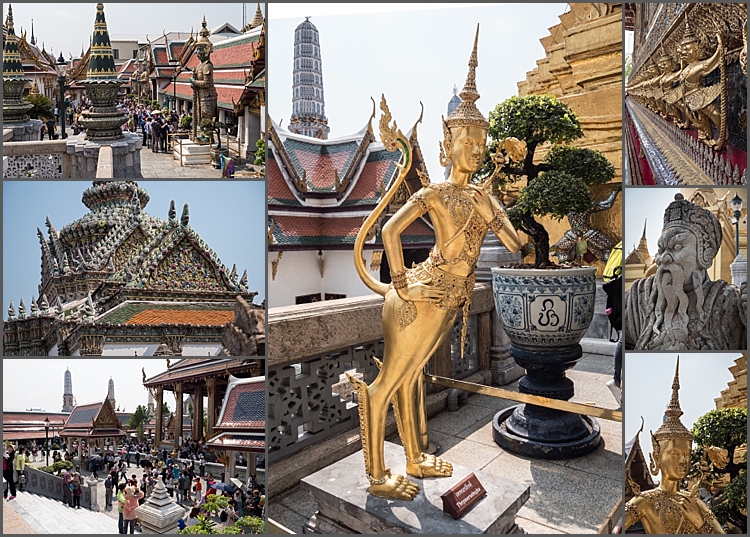 Reading this back it sounds as though we didn’t enjoy Bangkok but we did. We’ve been there a number of times now and have generally avoided the centre as we prefer just wandering around the streets to see what we come across. China town is fun though, you can buy lunch for a ridiculously cheap price. Travelling up and down the river on the ferries is what we enjoy doing and going into the Wat’s (Buddhist temples) which are everywhere. Bangkok is a buzzing, lively city and a real attack on the senses and apparently has more visitors than any other city. It’s not difficult to see why.