It was an interesting drive to Jodhpur. The views going over the hills were stunning and the monkeys at the side of the road were an added bonus. You might spot in this monkey picture that we almost had one in the taxi with us as his paw grabbed the top of the window …we quickly closed it. They only looked cute from a distance! 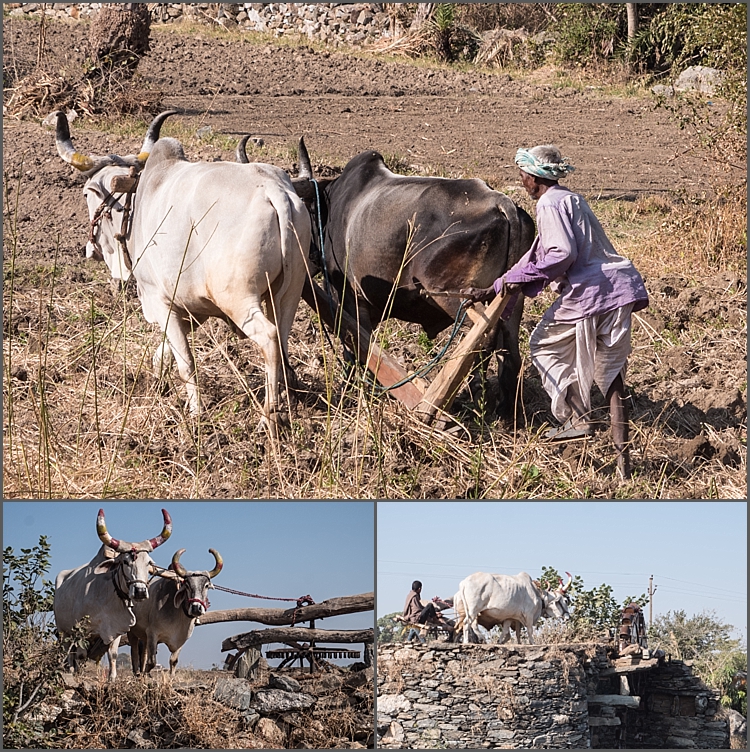 Our first stop was by a watering hole where the oxen were raising the water to irrigate the nearby field using a centuries-old system. We were equally fascinated by the farmer in the other field  who was tilling his land using a wooden plough pulled by two very lean looking bullocks. Tough work eaking out a living in this terrain and climate and using what we would consider very primitive methods to work the land.

We arrived at the Jain Temple just a few minutes before it opened to the public. Enough time to read the board listing all the regulations of which there are many. Inside there are guards making sure visitors stay inside the designated areas and although photography is allowed even pointing your camera at the inner sanctum gets me a sharp rebuke from a guard.

This temple constructed entirely of marble is stunning. Each pillar is a work of art and apparently there are 1444 of them! The ceilings are intricately carved too. If you’re travelling between Jodhpur and Udaipur don’t miss visiting this Jain temple at Ranakpur, it’s well worth it.

Our last stop before arriving in Jodhpur was down to me asking the driver to pull in to see what this guy was doing. You can see in the black and white picture that he has a wooden structure attached to a pole going into the ground and the oxen walking round which turned the central pole. He was blindfolded, the animal that is, so I was more concerned about him than what the guy was producing. I was told the blindfold meant that the animal wouldn’t get dizzy and was assured that it had regular breaks. (I’m gullible enough to believe this!). I can’t tell you what the ‘sticky gooh’ was but there were plenty of people stopping to buy a bag of it. John and I both had a taste and yes, it was delicious, if a bit too sugary.

At last we arrived in Jodhpur, the city known for its many iconic blue buildings. As soon as we were met by our auto rickshaw driver, Nehru, who had the most wonderful warm, welcoming smile we knew that our five days here was going to be great!