It was our last full day in Jodhpur and so we decided to take a trip into the countryside.

Our very chatty driver had a planned itinerary which made the trip easy for us. The first stop was a visit to a Bishnoi family. Bishnoi is a Hindu religious sect found in the Western Thar Desert and northern states of India. I found out more about this sect when we got home and it’s fascinating. Their diet is totally vegetarian and amongst other principles they have a ban on killing animals and provide protection to all life forms. They make sure that the firewood they use hasn’t any small insects and they don’t wear blue clothes  because the dye for colouring them is obtained by cutting large quantities of shrubs. Unlike other followers of Hinduism they bury their dead rather than cremate them as they have a very strict ban on cutting down trees.

Their lifestyle is very basic including living in round mud huts with a grassy roof. Not only a basic life but a healthy one too. The head of the household and his wife were both eighty-seven apparently and very fit. No problem for them sitting crossed-leg on the floor or grinding the corn using a very heavy grinding wheel! We also had a demo by the elder on how to make liquid opium! Didn’t taste too bad either. Wish I hadn’t worn my blue cotton top though!

The wildlife in the area is amazing too. Antelopes, gazelle, blue bulls and some very large birds which I think were cranes. Anyway they made an amazing sight when they took off.

Despite the fact that families on the tourist trail are happy to have their picture taken, the Bishnoi are very private people and dislike having cameras pointed at them. For the picture at the top of this Blog and the one below I had to work quickly. I never like taking pictures of people who aren’t happy about it but I couldn’t resist capturing a couple of shots of their wonderful saris. 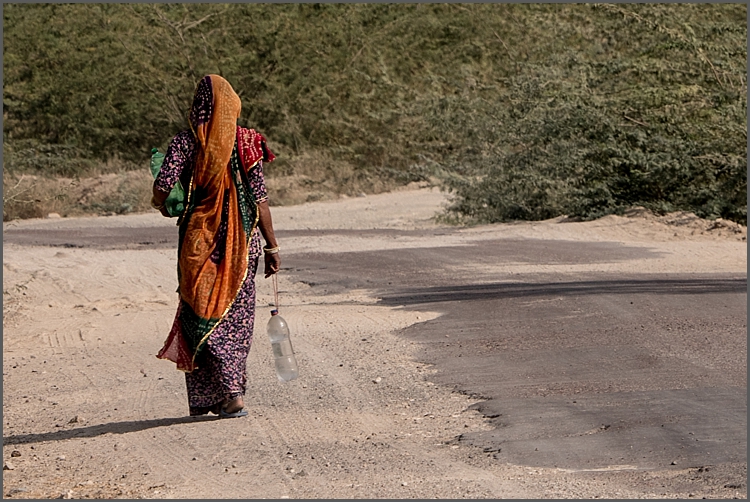 We enjoyed the morning although we felt guilty that we bought so little at the pottery place and nothing at all at the block printing workshop even though both guys gave us an interesting demo. We felt a bit trapped but if there’s nothing you want and it’s the last day …what can you do? However …on the way back just as we’d got near to the city our driver asked if we wanted to stop at an embroidery place. We weren’t that bothered as by now we could do with a cold beer back at the Haveli but we said okay and that we wouldn’t be long. It turned out that this place was a large warehouse full of the most beautiful textiles, they were stunning. An hour later we left with a gorgeous Indian wall hanging and a silk bed throw to die for! It was a great way to finish our trip!